Grab a glass of eggnog, a blankie and snuggle down in your favorite easy chair with this enchanting tale! A Jinglebell Junction EXCLUSIVE — Two Trees from the book, Stories from the manger, by David Michael Smith. 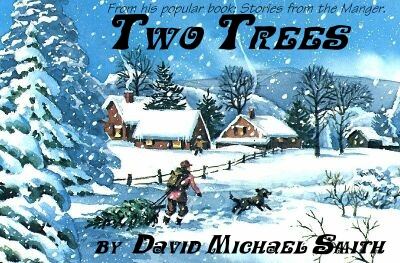 Two Trees from the book: Stories From The Manger

“No it’s not,” denies the man, prone on his back under the tree with a grunt.

“Yes it is,” the woman flatly confirms, “it’s leaning to the right, about to tip over.”

“You must be going blind,” he snaps.

“Robert, how can you tell whether the tree is straight or not, you’re flat on your back under the ugly thing. Up here it’s definitely leaning like the Tower of Pisa.”

“Well, then, next time you can go get the tree,” the man defends, sliding back out to see for himself. “If it was up to me we wouldn’t get a tree anyway. I’d rather give the money to the poor.”

I sit nearby with my brother and two sisters, on the family sofa, silently watching our parents at work. Dad is the laborer, the Christmas tree erecting specialist, while Mom handles the task of foreman.

“That tree is straight as an arrow,” Dad blurts out, frustrated.
It’s Christmas Eve and the family tradition of putting up the tree is well underway. It started an hour ago with Dad bringing home the freshly cut fir, or at least that was what the sign advertised. Funny how all those needles fell off into the floor when we brought it inside. Then Dad had to saw off the top and remove a half dozen branches. For some reason, he ended up wiring in three of the limbs, filling in some bare spots.

Next, with the tree ready to be erected, no one could locate the tree stand. At first everyone thought the other had hidden it, but no logical motive could be given for such a preposterous allegation. A suspicious glare was cast upon the family mutt, Roscoe, but he rolled his brown eyes as if to say “What, me?” Eventually it was found, in the box marked ‘Lights’. No one knew who was guilty of that crime, although a poll of hands later determined poor Dad was the culprit. I waited with the growing impatience of the 14-year-old I was, ready to decorate the tree with bulbs and lights and tinsel and chain links of red and green paper my brother had constructed in school. But the process was taking a lot longer than I thought it would. Our spirits were becoming more and more ‘Grinch-like’.

Somehow I envisioned us eating popcorn and green sugar cookies cut out like little trees, slurping down spicy cider, laughing and smiling like the images on some Hallmark Christmas card, but at this moment it appeared everyone had forgotten Christmas was nearly here. Instead, the world seemed to revolve around the crooked tree.

Again Dad assessed the tree, standing next to my Mom, shaking his head in defiance. “That tree is leaning I tell you,” she insisted, “and it’s going to fall over, probably on top of the kids while they’re opening their gifts tomorrow morning!”

Dad needed a break. Mom did too, and she retired to the kitchen to tackle additional holiday chores. Dad disappeared into the deep recesses of the house. The four kids sat silently on the sofa staring at the tree, with visions of falling Christmas trees upon our heads fresh in our minds.

Finally, I spoke, with the calm determination of John Boy Walton transitioning from boyhood into manhood. “The tree’s cursed,” I judged, to my siblings. “I’m going to go get another.”

I’m not sure if it was because I refused to line the pockets of some revenue driven tree farmer, or because I didn’t have any money (or maybe it was I wasn’t old enough to drive), but I had to take action. I slipped out to the shed, found the old rusty saw that hadn’t seen action since my brother sawed off the head of my kid sister’s Barbie, and into the surrounding woods I went, in search of the tree.

It was cold out, flurries and bitter temperatures in the forecast. The sky was gray, like the Naval ships in Norfolk. As I trekked through the stark wintry woods, brittle brown leaves crunching under my boots, I started to wonder what in the world I was doing. My plan was to find an appropriate tree, within five minutes of entering the forest behind our home, cut it down and bring it back. Surely my family would applaud my Christmas spirit. Or, perhaps they would laugh at my gesture, like Lucy did to Charlie Brown.
“Don’t cut down something with only three branches,” I reminded myself.

Five minutes expired and no tree was found. Ten minutes, then fifteen, and before I knew it I was gone for nearly an hour without any luck. Lower Delaware has lots of pines, oaks, maples, sweet gums and holly, but seldom do you see a ‘Christmas tree’ in the woods.

“Aw shut up,” I answered aloud to myself, growing discouraged and desperate.

My feet were frozen blocks and my lips were chapped and dry. I had scratched my face against the sharp fingers of a briar-entwined tree while ducking under some low branches. I had reached my threshold for patience, impatience standing on the other side of the doorway. I was about to abandon my search and whispered a single line of prayer for help. Then I saw it.

Thirty feet away was the tree. Although it was a White Pine, it had the looks of a fir or spruce, nicely shaped, about eight feet in height, full of green needles and a sprinkling of pinecones. I approached it as Indiana Jones would approach a precious, sparkling treasure in some obscure country, with reverence and spellbound intrigue. Then I did what I later would realize was an illegal act; I cut the tree down. I was quite winded by the time I finished dragging the heavy tree back to our yard, perspiration soaking my inner layers of clothing. It didn’t matter. I was happy. This special tree would share our house for the next two weeks, receive a daily drink of water, and be treated with royalty. We would adorn it with colored bulbs and tinsel, and crown it with a shining angel of lights.

Fortunately, my parents were away, at my grandparents for a Christmas Eve visit. I wanted this to be a big surprise. I brought the tree inside and it was a perfect fit.

With the help of my conspirators, we moved the other tree, the cursed one, into my parents’ bedroom. They would fall peacefully to sleep each night staring into the mesmerizing white lights of the tree. We assembled the other tree in the living room, decorated it with old ornaments and colored bulbs, and awaited Mom and Dad’s return. My heart beat with excitement. The ‘Grinch’ was dead! When they arrived they did not at first realize what we had done. I believe they even went as far as entering their bedroom, removing their woolen cloaks and exiting without recognizing a tree now shared their bedroom. It was like one of those silly TV sitcoms, where the main character walks right by some bizarre scene and doesn’t immediately see it. I can almost hear the laughter of the studio audience. Moments later the light bulb lit and Mom exclaimed, “Is there a tree in our bedroom?” as if it was an illusion and only she could see the vision.

Realizing there was also a tree in the living room, she seemed a bit in shock. An explanation was due and I presented my story.

Something happened at that time, an epiphany of sorts, one of those mountaintop Grinch conversions, or the snowy London morning after the hauntings of poor Mister Scrooge. The mood in the household changed, became merrier. Mom and Dad chuckled over my plight into the forest, both no longer concerned about the vertical precision of either tree. Both trees were completely decorated and lit, and both were proclaimed ‘perfect’. Someone turned the stereo on and put an album on. Johnny Mathis and Doris Day sang Christmas songs backed by choirs and orchestration. Eggnog was served to the children and popcorn was popped. Parents shared festive spirits, served over ice, and kissed under the mistletoe. It began to flurry outside. And the dog was no longer rolling his eyes. Now he had two trees he could nestle under and dream about sugarplums, or whatever canines dream about!

Jinglebell Junction has EXCLUSIVE permission for use of this story. This story may not be reproduced, without permission in writing from the author: David Michael Smith. © 1999 – 2011 All Rights Reserved.