Through the ages and around the world, the man of eternal spirit has been known by many names.
Sinterklaas, Father Christmas, Kris Kringle, Saint Nicholas, Pere Noel, Grandfather Frost and the Jolly Old Elf are just some of those names. But today in America we recognize the man in the Red Suit and jolly appearance as Santa Claus.

Even in ancient times, cultures had personalities who would bring joy and gifts to deserving people. In Nordic countries, stories were told of Jolnir. The Celts had Cornunos and Germanic people had Vodin, who was pulled in his golden chariot by his giant steeds, Thunder and Lightening (Donder and Blitzen).

Nicholas story begins in the late 3rd century in Asia Minor where he was born as the only child to a wealthy older couple. Nicholas was educated in a religious setting by his uncle who was a priest. At an early age, his parents died in a plague. Nicholas decided to devote the rest of his life to the Church and wisely give his parents wealth away to those in need. Nicholas became a priest before the age of 20 and the Bishop of Myra at 30.

Stories abound about Nicholas being the righter of wrongs, the protector of the innocent and the victor of the people.

Perhaps the story of a noblemans three daughters best illustrates the magnitude of Nicholas generosity. Having lost his entire fortune, a nobleman was left without the means of paying his daughters dowry. Without an adequate dowry, a young lady could not find a respectable mate.

One daughter decided to sell herself into slavery to provide a dowry for her sisters. When Nicholas heard of the predicament, he secretly went to the noblemans house and threw in a bag of gold. At a later date, he tossed in a second bag. In some versions of the story, the legend tells of the gold landing in a stocking.

When it came time for the third daughter to be married, the nobleman was determined to discover the identity of his secret benefactor. He waited each night, listening for the sounds of his visitor. Sure enough, Nicholas was apprehended. The embarrassed bishop made the father promise he would not tell the secret. However, the fathers promise was short lived. 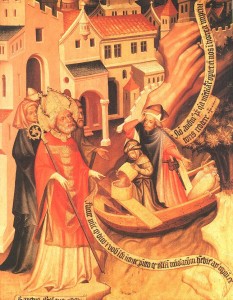 Word spread quickly throughout Myra that Bishop Nicholas was responsible for the hundreds of Saintly deeds performed over the years.

Bishop Nicholas was a delegate at the First Council of Niocea in 325 A.D. It was from this council that we obtained the Nicene Creed and the date of Christs birth was set as December 25 to offset pagan celebrations.

His fame spread far and wide. Even after his death on December 6, 343, the stories continued as many miracles were attributed to him.

After his death, some citizens of Myra honored his name by picking up where he left off. They began meeting the deepest needs of hurting souls without seeking any credit for themselves.

Sailors took the stories and teachings of Nicholas back to their homelands. Christian missionaries presented Nicholas as a replacement for the Shaman and other gift bearers in pagan societies. Over the next 400 years, December 6th, Saint Nicholas day and its celebrations spread to other parts of the world.

As the legend of Saint Nicholas traveled, his name began to change. During the Reformation, Martin Luther removed the worship of saints and banished any celebrations linked to Saint Nicholas. Not wanting to disappoint the children, he allowed the continued practice of gift giving. He did move it from December 6th to the eve of Christs birth with the gifts being delivered by the Christkindl or Christ Child.

As Saint Nicholas burst upon the American scene in the early 1600s, he had lost most of his holy attributes and was mainly a symbol of the generosity of mankind. In English, the name Sinterklaas became Santa Claus.

Santa in the New World

The Dutch settled in New Amsterdam (present day New York) and kept the traditions alive and to themselves until the American Revolution. As the new nation broke away from British traditions, they took some of their clues from the Dutch.

Washington Irving wrote of Sinterklaas in his 1809s A History of New York. But it was Clement Moores poem an Account of a Visit from Saint Nicholas that changed the saintly Sinterklaas to the jolly Saint Nick.

The early image of Santa

Thomas Nash was the one to show America what Santa Claus looked like. Nash was the editorial cartoonist for Harpers Weekly from 1860 to 1890. He had a passion for drawing Santa Claus and with each rendition, he added new elements to Santas story.

In the 1880s, an international competition was held to see who could reach the North Pole first. Nash decided to make the North Pole Santas home. Equipped with a special telescope, Nashs Santa could look in on children and make notes in his book of naughty and nice.

In 1890, we had the first department store Santa. James Edgar in Brockton, Massachusetts dressed up in a suit made for him by the stores tailors. Over a thousand people lined up to see Santa that first day

On Christmas Eve, 1891, President Benjamin Harris dressed up as Santa for his grandchildren in the White House.

It was in 1897 that 8 year old Virginia OHanlon wrote a letter to the New York Sun asking Well, is there a Santa Claus?

The Suns famous response; Yes Virginia, there is a Santa Claus. He exists as certainly as love and generosity and devotion exists. Alas how dreary the world would be if there were no Virginias. Thank God he lives forever. A thousand years from now, nay 10 time 10,000 years from now, he will continue to make glad the heart of childhood.

It was in the 1930s that Santa went through one final facelift. Coca-Cola hired Haddon Sundblom in 1930 to draw a series of ads showing Santa drinking Coca-Cola. It is said that he made many of his famous paintings while looking in the mirror.

The Coca-Cola ads appeared from 1931-1964 and probably did more then anything to shape the image of Santa Claus as we know him today.