The 2011 Rockefeller Center Christmas Tree will be lit for the first time on Wednesday, November 30, 2011, with live and taped performances from 7 P.M. – 9 P.M., at Rockefeller Plaza, between West 48th & West 51st Streets and 5th and 6th Avenues, Manhattan.

Many Rockefeller trees were given to Rockefeller Center by donors. The late David Murbach, Mgr. of the Gardens Division of Rockefeller Center, scouted in a helicopter for the desired tree in areas including Connecticut, Vermont, Ohio, upstate New York, New Jersey, and even Ottawa, Canada. Once a suitable tree is located, a crane supports it while it is cut, and moves it to a custom telescoping trailer that can transport trees up to 125 ft (38 m) tall, although the width of New York City streets passing through Rockefeller Center limits the height of the trees to 110 ft (34 m).

Once at the Rockefeller Center, the tree is supported by four guy-wires attached at its midpoint, and by a steel spike at its base. Scaffolding is put up around the tree to assist workers in putting up 30,000 lights attached to 5 miles (8.0 km) of wiring.

The star that has topped the tree since 2004 is 9.5 ft (2.9 m) in diameter and weighs 550 pounds (250 kg). This “Swarovski Star” was created by German artist Michael Hammers, who in 2009 additionally designed his own star lighting production. 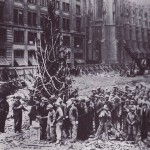 The decorated Christmas tree remains lit at Rockefeller Center until the week after New Year’s Day, when it is removed and recycled for a variety of uses. In 2007, the tree went “green,” employing LED lights. After being taken down, the tree was used to furnish lumber for Habitat for Humanity house construction.