The Yule Log started out, we believe, as part of Norse Winter Solstice celebrations. Back then, the longhouse would have a huge fireplace, and the flooring would be either stone or packed earth. Tradition says that the Yule Log began as a huge log, big enough to burn for the entire twelve-day festival. One end would be pushed into the fireplace, and as it burned away, you’d push it in some more until it was entirely consumed.

Later, the Yule Log got smaller, in keeping with smaller fireplaces. It would be decorated with greenery and sometimes doused with wine; and after an appropriate ritual, it would be set alight. Somewhere along the way, the tradition of keeping it burning for twelve days and nights was shortened, too. Now it need only burn overnight, from Christmas Eve till Christmas day. 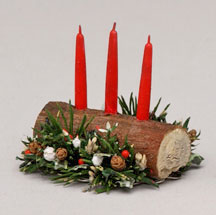 With fireplaces being less and less common these days, the practical Pagan has adapted. Some choose a small log, some twelve or sixteen inches in length, flatten it along one side to make a base, and drill from one to three holes into the top, suitable for the insertion of candles. The candles are generally (but not always) “fire” colors, with red being the most common. The log is decorated with greenery, sometimes real, sometimes artificial – pine, spruce, fir or other evergreen boughs, holly and mistletoe are a few possibilities – and the candles are lighted at sunset on the Winter Solstice. Tradition says they should burn through the night; but given safety considerations, most only allow it to burn so long as someone is around to keep an eye on it.

In other households, the Yule Log has evolved into the Yule Candle, a pillar-style candle in the colors of the season. It can be inscribed with suitable symbols and lighted at sunset, as above.

(For more information on the Yule Log, go here: http://www.snopes.com/holidays/christmas/yulelog.asp)